[ Note of frustration: For the record, I would just like to say that I have struggled to write this column hopefully the delivery doesn't dull the message.]

[h/t for the slidehare presentation below to Mike Kujawski]

What The F**K is Social Media?
View SlideShare presentation or Upload your own. (tags: socialmediamarketing marketing)

Ok so if you haven’t checked the deck yet, do it now. I refer back to it sometimes so it helps if you are familiar with it. Overall, the (excellent) presentation makes me wonder about how the government communicates with both its prospective and current employees.

Let's imagine for a second that the barcamp folks got together again, but for a different purpose. Say we were brought in to pitch to the central agencies (PCO, TB and Finance) about the vast potential for the use of social media in government. Let's further imagine that for some reason the central agencies decided to let us roll with it - specifically to address recruitment and retention issues. The central agencies ask us if we mind if the key players from the PSC, CPSA and the CSPS (and whoever else you can think of as relevant) join us. We enthusiastically welcome them – a bigger audience!

All of a sudden all the players are in the room and the barcampers have been given a safe space to be creative (une carte blanche) and walk people through how we can leverage social media to bolster the GoC’s recruitment and retention.

But what the hell would we do?

Given, we would all have some pretty cool ideas about what technologies to deploy (slide 4), the justification for deploying them (slides 5-46), and of course how to deploy them (slides 48-69).

In short the barcampers would provide the ‘what (technologies) to’, the ‘why to’, and the ‘how to’, but what about the ‘what (message) to’?

What is the Message?

What is the message that the GoC wants to deliver to its potential and existing hires? We have been poking around this issue recently on this blog while Etienne discussed it a while back when he blogged, Why Work for the Public Service?

Given, this blog and its authors are not officially cogs in the GoC’s message machine – neither are you. In fact, many of us are so far removed from that entire process that we may well be overlooking some very good work out there. This isn’t meant to be critical of existing mechanisms, but if there was a great piece of branding out there for the public service it would have likely been picked up by now and fed into the social media machine(s) … even if it was something simple and static. Given the familiarity and pervasiveness of social media, users would have mashed it, blogged it, podcasted it, dugg it, stumpled it, tweeted it, facebooked it, myspaced it, Delicious'd it, Reddited it, Newsvined it, Technoratied it, Slashdotted it, Blogmarked it, Twined it ...

The underlying point is that if there was a great example, we would all know it by now and that content would be all over the web, not just sitting and waiting at its point of origin.

Our Brand is Our Business (whether you care or not)

I suppose in a sense, what we do here is a small attempt at delivering that message through a different medium (blog) to a more specific audience (people interested in getting more involved in their organization’s culture). The point is that, as public servants, we are constantly engaged, (obvious when thumbing through this blog, but not so obvious when participating in seemingly unrelated fora) in a conversation about the public service brand. 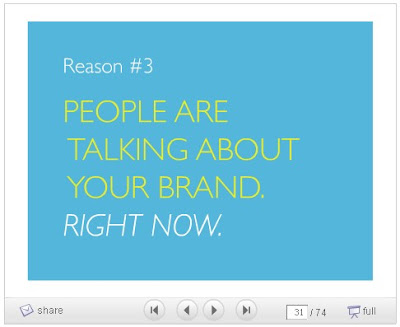 If other people care a whole lot more about recommendations from others (slide 25) than they do about advertisements (slide 24):

Then my conversation with a stranger on the bus about my job has greater implications for the public service brand then any advertisement delivered through a traditional medium (recall slides 21-23).

How many times have you as a public servant had to explain your job to eye-rollers or chucklers? Often just telling someone you are a public servant labels you. You are falling victim to the brand that already exists in the minds of other people.

Yes, the brand may be suffering. No the answer is NOT to try to control the brand further (recall slide 57): 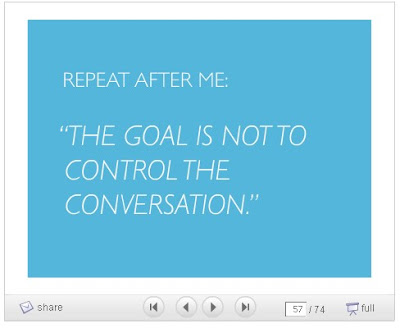 (Oh and don't forget that messages are not conversations (recall slide 52)).

The answer may be to set the stage for current public servants (by engaging them!) to build their brand and engage in those conversations (with strangers on the bus, or with people via their social networks) about what it is like to work in the public service.

One logical step towards achieving that goal may be to allow them access to those tools at work, and support it with the necessary IT infrastructure. The only difference between the conversation they have on the bus and the one they have via social media is that the latter reaches a hellulva lot more people, and does it a lot quicker.

Nothing says committed to recruitment and retention in the age of social media like:

The site you have tried to access is not authorized ... It has been rated as inappropriate ...