Update: Still Scheming Virtuously (on the road to collaborative governance)

Well, you may have noticed that last week I was fairly excited when I got a call from Dr. Gilles Paquet, Professor Emeritus, and I man I haven't spoken with in over a year.

The last time I spoke with him was back in September of 2008, just after I sat with him on a panel discussion put on by HRSDC's Strategic Policy and Research Branch. The discussion focused on leadership in governance. You can actually still read my speaking notes if you are interested (they were inspired by this publication c/o Paquet). 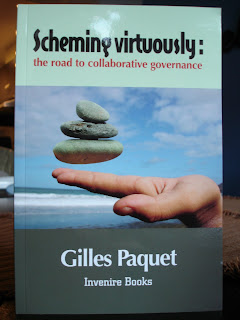 He thanked me for taking his discussion to heart and actually pursuing not only virtuous scheming in my own endeavours, but for developing and sharing the practical guide to enable others. Needless to say I was absolutely beaming in my office. Then he told me something that nearly made me fall out of my chair. I won't repeat it verbatim, but note the final paragraph of the foreword of Gilles Paquet's new book: 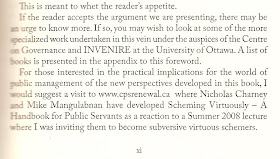 Awesome! Score one for the good guys! Being included in this book is very humbling, I feel truly honoured and would like to thank everyone who has been so supportive of us and this endeavour (all you virtuous schemers out there!).

Truth is we have been secretly working on Scheming Virtuously 2.0: An Updated Handbook for Public Servants (working title). We hope to be able to release it in the fall at the 1 year anniversary of the original. Gilles has graciously offered to publish in Optimum for us, which is very exciting (to put it mildly!).

All of that being said, we would like to make it available in both official languages, so if anyone (or group of people willing to work in concert) are willing and able to help translate it please leave us a comment to let us know; we'd really appreciate it.

Oh and don't forget, this week is National Public Service Week. In honour of that we are trying to release 3 columns this week:

Until then, keep scheming virtuously!