Last week was a busy one for the Clerk of the Privy Council, Wayne Wouters. In addition to his regular duties he announced a new website, found his way on to twitter, and published the 17th Annual Report to the Prime Minister on the Public Service of Canada. I want to share 3 neat visualizations (h/t to @Jesgood) but don’t want to go into the nitty gritty of the report:


Instead I want to focus on something that came out as part of the report, something I tossed out there on twitter, and that spurred a number of in-person conversations with some of my colleagues. According to the report there is not a single executive in the Federal Public Service under the age of 30.

Before proceeding, I just want to say that in over two years of writing I have purposely steered clear of any discussion of age; that I don't necessarily agree with those who advance arguments rooted in generational differences; and that I expect this column to be contentious (despite my best efforts for balance). The reason I have stayed away from the issue is that it is generally divisive, polarizes people based on their age and tends to invoke a more guttural (rather than intellectual) response.


Start with the Data

I took the liberty of mashing up the data from the report to include both the entire public service and the executive cadre on a single chart. Here is the graph: 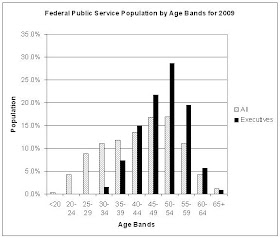 We discuss the need for new and innovative ideas so often in the public sector yet within the hierarchical structures, an organizations' ability to act on those ideas is firmly entrenched in the executive cadre.

Put another way, the public servants under thirty are in positions where the best they can do is advise up; and if advising up is considered as "going against the grain" it becomes a very difficult conversation for new public servants (or am I underestimating the degree to which advice = influence?).

Also, if you have any comparable data (executives by age band) in other jurisdictions or private sector companies, I would love to see it and do a side-by-side comparison. I think having comparable data would help guide the discussion.

My question is this: is there a tension between the constant push for new and innovative ideas and lack of young executives in the public sector? Consider the can of worms opened ... please, I am very interested in all of your thoughts on the matter. Please share them via comments.

I'll start - I feel as though there is in fact a juxtaposition here, although articulating it in a way that doesn't alienate people is incredibly difficult.
Share