For What It's Worth: On Impartiality During Elections

It is election time again in Canada. For public servants that means increased public scrutiny (real or perceived) and constant (very real) reminders about our obligations as professional, non-partisan public servants.


There is something happening here

My interests in civic life span far beyond the traditional left-right spectrum of partisan politics.

I think that healthy debate is important for democracy; I have a deep disdain for rhetoric (from anyone at anytime, not just politicians during election time) and am keenly interested in the space between elected officials, bureaucracy, technology and public policy.

All of which strikes to the very core of democracy, but is far more nebulous, nuanced and perhaps even contentious, than an oversimplified left-right spectrum of political convenience.


What it is ain't exactly clear

Make no mistake, the internet is changing the political landscape. You want a concrete example of how the ground is shifting? We needn't look any further than the Vote Internet Campaign being run by OpenMedia.ca for evidence.
In my opinion it is an issue-based movement not a partisan one. Sure there is a scorecard that attempts to help voters choose how to vote by highlighting particular aspects of party platforms, but ultimately I believe it to be non-partisan because they made every attempt to include all the major parties.

So I suppose the question is: Can I get involved?
To what extent?

Could I erect the equivalent of a digital lawn sign on my blog?


There's a man with a gun long tail over there

To vote is to distill a complex array of different, possibly conflicting considerations into one: the parties, the leaders, the local candidates, plus whatever issues are pertinent to you, and the parties’ positions on each. Which makes that perennial journalistic search for the “ballot-box question” such a preposterous enterprise. Every single voter will have his own ballot-box question, or questions. I cannot tell you what yours is, or should be. I can only tell you mine. - Andrew Coyne, A price must be paid - but by whom (Macleans)

I agree with Coyne, distilling the issues that are pertinent to me is difficult and yields no true answer (ballot box-question); and I have a feeling that others agree. I see no other way to explain the popularity of campaigns like StopTheMeter, a single issue online campaign that has more endorsements on Facebook than any of the federal political parties. Might this be construed as evidence that citizens may be more interested in specific public policy issues than they are in predetermined packages of public policy approaches arranged neatly on a left-right spectrum?
Is this the long tail of public life disrupting the status quo?


Telling me I got to beware be more aware

While writing this I had a thought: is voting for a party akin to buying Neapolitan ice cream when all someone wants is chocolate (specific interest). I wasn't sure how well the metaphor worked, so I tried it out on Twitter, which led to this exchange between myself and @Prugelmeister (whom I respect greatly): 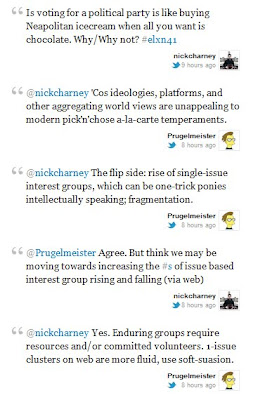 The exchange doesn't have all the answers, but confirms my suspicions that perhaps we should stop and look what's going down.