This is why we can't have nice things (in government) 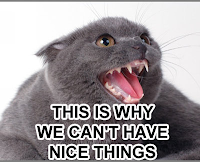 Last year I wrote about how enterprises could leverage tablet applications like Flipboard in order to change how senior leaders received and actioned their business intelligence.

After sitting on the idea for a year I established bureaucrati.ca as a foothold to try to help bring the app to market (note I'm pivoting on the role of the site, it will now be an outlet for creative writing).

Trying to get an app built meant hitting the streets and talking to a number of established mobile development companies and start ups, it also meant stumbling
on what I think is one of the core reasons why we can't have nice things in government.


As for the reason? Well it's painfully simple.

While many of us on the inside already know that there are procurement challenges (ever try to procure a Mac?) I find the fact that the innovators in the private sector feel as though the procurement process itself is so broken that they can easily afford to purposely ignore the entire public sector. In the midst of the establishment of a new Shared Services Canada, I can only hope that those at the helm take a good hard look at the details around how we procure IT resources, because it may just be one of the reasons why we can't have nice things in government.