On Trump Cards and Gatekeepers 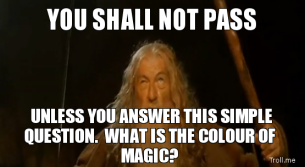 Make no mistake our culture is one largely defined by trump cards and gatekeepers. You undoubtedly have run into one or the other, or perhaps more rightly, the latter deploying the former as some sort of delay tactic, tripping you up on whatever you are working on. For the uninitiated, the term trump card can refer to any sort of action, authority, or policy which automatically prevails over all others" (source: wikipedia) whereas a gatekeeper is someone who controls access to something (e.g. funding, approval, the next stage) (source: wikipedia).

In the government’s technology space, common trump cards include (but aren't limited to) IT security, accessibility, official languages, privacy or access to information laws. I have run into countless gatekeepers during my travails through the public service; people who overemphasize their concerns, reference a policy in some abstract way, and suffocate your line of thinking in its infancy (not even a project, but a line of thinking!).

At this point in the argument I should probably say that not everyone who occupies a position as a gatekeeper acts strictly as an organizational brakeman. There are good ones out there, ones who will cite concerns, relate them to a specific subsection of the relevant policy document, and either propose an alternative or develop a mitigation strategy (or perhaps even an amendment to the policy!). What follows isn't advice aimed at helping you deal with those types of people, because quite frankly (and you'd probably agree), they are approaching their work the right way. That being said, if you want to move beyond your organization’s brakemen (gatekeepers) you need to be able to push back on them, ask insightful questions, and ask them to cite with precision the points of contention between the legislation, regulation, or policy and the line of thinking you are proposing.

The reason trump cards are so effective is that we understand them collectively to be a final answer. If you want to undermine their utility you simply have to stop accepting them as a the final resolution to a problem. This takes courage, and can make gatekeepers uneasy because they have grown accustomed to using trump cards as a conversation ender; my challenge to you is to use them as a conversation starter.


But this problem isn't unique to the technology space in government, its emblematic of the entire culture.

This is just a caveat to illustrate the pervasive nature of trump cards and gatekeeping. A few months ago I took a photograph in the lobby of a government building. I was outside the security checkpoint, I didn't photograph anyone, nor did I capture any security equipment. I was immediately approached by security who told me I wasn't allowed to photograph the lobby area, citing that it was against policy. He didn't tell me which one, nor did I ask, but as he approached me (presumably to ask me to erase the photograph) I informed him that I was an employee and showed him my ID badge. He glanced at it quickly, retracted his statement and proceeded back behind the security desk. I was (and still am) completely dumbfounded. What policy was he referring to? What were the specifics? How did it differ because I was an employee?