The Innovator's Dilemma: The Revolutionary Book That Will Change the Way You Do Business by Clay Christensen

Why I read it

This book is often referred to as the "go to" book on disruptive innovation, it's been on my radar for a bit, it was time to get it done.

While the Innovators Dilemma draws its research from private sector examples the lessons it points to - especially those about the blind spots created by good management and serving current customer needs - are equally applicable in the public sector.

Anyone looking to lead a big change in their organization may want to consider it as creating a new line of business and spinning out an entirely new organization to do so. The book highlights the fact that new and emerging markets (needs) are almost impossible to serve if those trying to deliver are beholden to processes that evolved to meet other needs. It argues that there is a difference between sustaining innovation (innovation that helps you better serve your current market) and disruptive innovation (innovation that allows you to serve a new or emerging market). While I haven't given it a lot of thought yet, the book has made me wonder if movement towards open government and open data will be best achieved by pursuing sustaining or disruptive innovation strategies.

Either way, I got a lot out of The Innovator's Dilemma you will too.

This week got me thinking

I spent last week in Richmond Virginia and Washington DC. I visited old friends and made new ones. I put in a couple days of probono work for the great city of Richmond, and spoke at the Next Generation of Government Summit in DC.


It's been a whirlwind week and I am completely exhausted but the week got me thinking that maybe I should just stop and take the time to say, thank you.

The secret sauce of change management

A long time ago, in a bureaucracy far far away a policy wonk named Nick was tasked with creating a wiki dashboard that showed - in real time - what everyone across the policy sector had on their plate.

The idea was to help the sector coordinate its business better and encourage a more proactive, rather than reactive, approach to information sharing.

Nick was still relatively new to the department and took to his task with great rigour.

He built a series of nested (bilingual and accessible!) wiki templates so each person would only ever have to edit their own page.

He focused tested the design with users, and feedback was overwhelmingly positive.

He incorporated keeping the dashboard up to date into the Human Resources Action Plan. He arranged for training on how to use the software.

And if memory serves, he even managed to get the project into a senior manager's performance agreement.

After about 6 months of work, despite all of the measures outlined above, the initiative was dead in the water.

The reason it didn't work was that populating the template was largely seen as a duplication of work by people in the department who were already required to fill provide the same information in their quarterly reports.

Staff pushed back on the duplication and returned to their old ways, feeding the machine vertically rather than sharing horizontally.

Eventually Nick abandoned his efforts and scuttled the pages.

We often get so caught up in nurturing change that we forget that we must also fend off competition that could undermine its viability; that the real secret sauce to change isn't seeding the new ideas, but rather killing the existing lines of business that compete with them.

Trust is the only thing that scales

Sometimes the best thing you can share is real life advice you've given someone. What follows is an email [almost verbatim] I sent to someone who asked me about the blurring line between professional and personal lives online (emphasis added):


My first impression is that this [person] is doing something awesome [online]; and that I wish the [organization] would find a way to leverage [their] passion for outreach/recruiting purposes (i.e. bring [them] into the fold officially rather than keep [them] at arms length); but that might just be wishful thinking.

My professional opinion is that your responsibilities as a communications adviser to monitor this particular situation ends at advising [them] to read the TBS guidelines and remind [them] of [their] responsibilities under the Code of Values and Ethics (and any other unique codes of conduct within the organization).

As you may or may not know I've been blogging about the public service as a public servant for the last 4+ years without major incident. As long as [they are] willing to accept the consequences of [their] actions, whatever they may be, I see no harm in letting [them] continue.


PS - I only got one Guerrilla Renewal submission, here it is, and it is awesome.

MBR: Reality is Broken, Why Games Make Us Better and How They Can Change the World

Reality Is Broken: Why Games Make Us Better and How They Can Change the World by Jane McGonigal

Why I read it

I wanted to learn more about gamification, this seemed like a natural choice.


The book speaks at length about the future of collaboration and the role of games in promulgating a more collaborative ethos.

In fact, immediately after reading the chapter on Collaboration Superpowers I was convinced that senior managers looking to better understand collaboration ought pick up a copy of the book.

(Note: the whole book is available on Scribd at the link above but I'm really not sure as to the legality of it being there.)


What struck me most about the book was how it rooted some of my long standing interests and how I approach my work, in my love of (and experience with) video games; in particular, my desire to be immersed in highly engaging work, the fact that I enjoy frequent feedback, and the fact that I tend to approach problems with a long/systems view.

I was also struck with how McGonigal relates a part of her argument to Malcolm Gladwell's Outliers, stating that we are growing entire generations of gamers who will all meet the criteria for the 10,000 hour rule, and that these people are likely to be more poised for collaboration than the generations that came before them.

If you are interested in knowing more about the concepts from the book, I've embedded a couple of videos from the author below, but I suggest picking a copy of Reality is Broken if you want a more complete understanding.

The other day I took down a notice from the communication board, took it back to my desk, and made some alterations with my Sharpie. 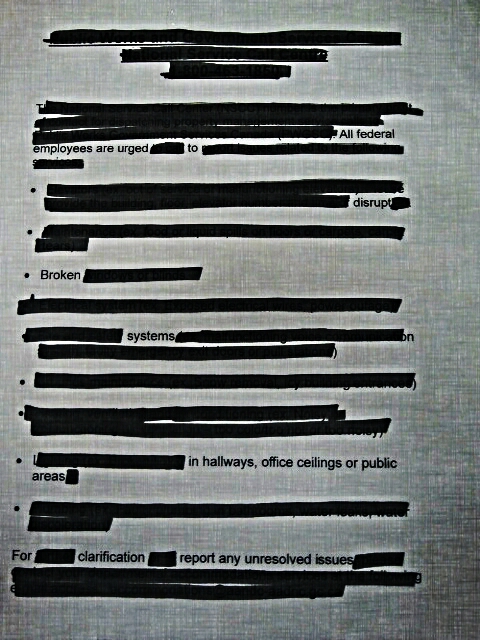 I got the idea from Austin Kleon's book Steal Like an Artist (which references his previous work Newspaper Blackout in which Austin uses a sharpie to black out newsprint to create poetry).

This is Guerilla Renewal at its finest.

Try it out, email me a copy, I'll post them here next week.

Now, off to affix it back to the board.