I've been thinking a lot lately about the issue of risk and how it relates to the idea of fearless advice and loyal implementation. Admittedly, these thoughts aren't entirely formed yet so bear with me.


When it comes to risk, we are our own worst enemy

Generally speaking I feel as though civil servants over-inflate the risks of almost everything they (we) do. We often chalk it up to the culture, forgetting that if you stripped bureaucracy of the bureaucrats the risk averse culture would likely disappear. Sure the written rules will remain, but no where (to my knowledge, and in my experience) are the written rules actually as stringent as our interpretations thereof.  My thoughts on how we approach to risk are best summed up with the famous Walt Kelly line (pictured to the left): "We have met the enemy and he is us". We are responsible for the culture, to blame it, is to blame ourselves; on this, I doubt I can be convinced otherwise.


The relationship with fearless advice and loyal implementation

Before delving any deeper, I should probably hang this caveat out there. Recent discussions with a number of colleagues (at different stages in their career) have led me to the conclusion that I am likely an outlier in that I have a fundamentally different understanding of risk than is the norm. Yes - its surprising isn't it - I have a high tolerance for risk, but I also have a high tolerance for consequences arising from my actions; and in the real world risk and responsibility are inextricably linked.

However, inside the bureaucracy I'm of the view that they are artificially divided. By this I mean to say that even when someone is willing to take a risk and bear the responsibility for its consequences they can't actually do so.  Rather than being able to simply pull the trigger on something they are forced to crunch their willingness to move ahead into some sort of recommendation (often in a briefing note) that gets pushed upwards onto someone else.  Sometimes this can be a good thing, for example it protects junior employees from taking the heat if the shit hits the fan, but it can also be paralysing since it concentrates risk in certain areas which likely makes those areas more sensitive to risk than they would otherwise be.


That said, here's my (related) observations on fearless advice and loyal implementation

Giving fearless advice is a low risk activity; there are plenty of opportunities to do so all along the long tail, and most of them are behind closed doors.  Loyal implementation on the other hand is a high risk activity; execution is always a delicate matter, and always held to the highest degree of public scrutiny. I think that perhaps we (public servants) have been spending far too effort on loyal implementation and not enough on fearless advice. Our natural hypersensitivity to risks out there in the public realm have crept into our conciousness in here.

Here's my best effort and trying to boil that all down to a single image (click to enlarge): 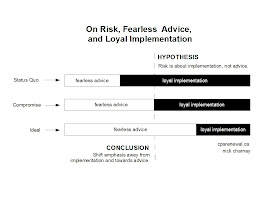