Kent challenged some of us to review Jeffrey Simpson's Chronic Condition in a haiku. I couldn't resist, and to be honest, I think this sums it up nicely: 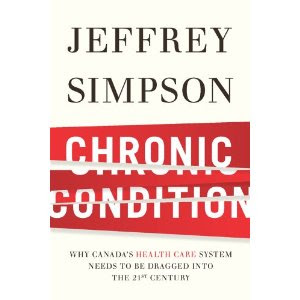 there's one thing bigger
than the length of our wait times:
gap between funds, costs

I liked Simpson's style of writing in this book. He uses a number of tactics to get his message across. He recounts his experience following around a doctor at the General Campus of the Ottawa Hospital. He offers a recap of how history has led us to the health care system that we have today. He provides a comparative analysis (albeit, an incomplete one in my opinion) between Canada and some other nations around the world. Interestingly, for the most part, he refuses to indulge in some comparison shopping between Canada and the U.S. Simply put, they're not even remotely the same and can't really be compared in any meaningful way. I'll buy that.

As I attempted to express in my haiku above, the issue is simple: we have an increasing gap between the costs or our health care system and the funds that attempt to keep it floating. Simpson argues that, as Canadians, we are effectively burying our head in the sand with "Canada is great!" rhetoric. While politicians skim the surface and look for efficiencies, the issue is no longer how to keep the system afloat — it is now about how to slow the descent. It's a dire warning and there are no easy answers. (Are there ever?)

I recently had a conversation with a colleague, lamenting the superficial conversations that take place about major issues in Canada. Instead of delving deep into substantive policy discussions, we dance on its political outskirts, talking around the issues. Somehow, I keep returning to Kent's blog post where he challenges us to have deeper understanding of the issues we're facing.

The discussion on the history of the health care system was belaboured but did provide insight into the mammoth challenge involved in making even the smallest changes to the system. What is 'normal' in the system is now very hard to change, even when it's clearly inadequate by international standards.

Unlike many evaluations of the health care system, Simpson delves into more than just doctors, nurses, and hospitals. Home care and other services are touched upon, and it's noted (rightly) that those services are often provided as part of public systems in other jurisdictions.

The book's treatment of the 'find efficiencies' issue is a telling one - while it's easy to suggest finding efficiencies, large bureaucracies inherently have systemic slack for a myriad reasons. One could argue that they should have that slack so that they can address urgent issues (should emergency rooms remain dormant or active when there are no urgent medical cases coming in?).

Simpson provides precisely the deep dive people need on such a pressing public policy issue; sadly it aims to foster a discussion that is both politically unpalatable and publicly taboo. The fact that there is a lot to agree with in the book — finding better international comparators than the US, rebuilding around intergenerational fairness, and being realistic about the limits of finding efficiencies — but (seemingly) little being done about it, scares the living hell out of me.

First off: a pleasant surprise of a read. I was looking forward to a deep dive into a thick, infinitely-faceted public policy issue, but I was expecting more of a “Alright Kent, let's get this done” approach to the actual reading part. Instead, Jeffrey Simpson led readers through a fairly engaging narrative (insofar as it was possible), using interviews and daily activities of doctors to frame the book. If anything, the narrative bordered on excessive — the lengthy political history of health care in Canada was interesting, but consumed a disproportionate amount of the book. It's important to understand the context, but the key elements are understanding the status quo and barriers to progress.

Simpson's core premise is that our health care system is not nearly as wonderful as we make it out to be, partially because Canadians make the all-too-easy comparison with the U.S. system. So, without an accurate view of how badly we're being let down, or how much we're spending unnecessarily, Canadian health care chugs on, bordering elephant-in-the-room status. If Simpson's assessment is correct, we'll either keep making great sacrifices to preserve the status quo, see a politician defy conventional wisdom and make reform an issue, or eventually hit a disaster politics catalyst that shakes us into demanding change.

That is, if Simpson's assessment is correct. I suspect it is, but I'd be curious to hear a counter-argument, and have seen some signals that I'll be following for the next few years (the talent gap may not be as big as expected, due to better than expected health). And I think Simpson underestimates the long-term value of Nurse Practitioners — I believe the economics of NPs will play out more favourably than his assessment, and I believe NPs will vanguard community health strategies that keep people out of hospitals in the first place.

My last comment will, I suspect, overlap with my confederates. The most interesting part of Chronic Condition was the political and cultural subtext that applies to all wicked issues that Canada faces. In Simpson's view, politicians are of the opinion that opening a health care debate would be a misstep. He's probably right, and the politicians are probably right. It's sad if an elected official, dedicated to a sober, evidence-based conversation about a genuine problem, would get shouted down by soundbites and “Canadians don't want that.” It's a function of a trust deficit, engagement deficit, and a political culture that could stand some health care.

Both for the public service and for Canadian civil society, we seem to pride ourselves on being absolute sissies. We deviously wink and pretend inaction is strategically calculated. We conflate cynicism with wisdom. Where's the virtuous audacity?
John Kenney — "Risk aversion is evident on all sides..."

Health care is commonly cited as one of the most important issues to Canadians. It’s a national symbol. Tommy Douglas, "Canada's father of medicare", is considered the greatest Canadian of all time (at least by those that participated in the 2004 CBC program, The Greatest Canadian). The stakes are high. And the system is sick according to Jeffrey Simpson in his book, Chronic Condition: Why Canada’s Health-care System Needs to be Dragged into the 21st Century.

Simpson makes a convincing case that the Canadian health-care system is on an unsustainable track given projected spending levels (health-care's piece of the fiscal pie keeps growing) and the demographics of an aging population. To provide affordable and adequate (yes, just adequate) health-care services, federal and provincial governments will be faced with difficult choices: cut spending, increase taxes, privatization, and/or find savings through increased efficiency.

Even if it was affordable in the long-term, Canada’s health-care system arguably does not measure up to some (not all) international standards, particularly in relation to countries like Sweden, Britain and Australia whose systems provide a better comparison and out-perform Canada’s in some respects, says Simpson. He argues that Canada's health-care system is not patient-centred, but "designed for and by providers", which presents obstacles for performance-based reforms and innovation. Claude Castonguay's observations on the culture of Quebec's health-care system in his 2008 report are cited and assumed to be applicable to the Canadian system as a whole, generally speaking:

Our health-care system is a monopoly installed at every level with the culture inherent to monopolies, whether public or private. The culture is based on regulation and budgetary controls, closed to the outside world, impermeable to real change, adaptation and innovation. It is a culture that favours inefficiency.


That's a hard-hitting diagnosis for any patient to hear.

Canada's system appears resistant to performance-based reforms (e.g. typically more funding is provided in effort to improve poor performance) relative to other countries where high performers are rewarded with increased funding. In Sweden, health-care performance data (e.g. wait times) is publicly reported, scrutinized by the media, and used to inform resource allocation decisions. Counties that exceed performance targets receive more money than those that do not exceed their targets. While the jury is still out on the impact on longer term health outcomes, Simpson reports that it is rewarding high performers and providing an incentive for others to focus on patients, find efficiencies, and/or innovate to catch up.

In Canada, governments are perceived to fear the public response to proposed changes while the public and interest groups fear they have too much to lose.  Risk aversion is evident on all sides.  Simpson does not explicitly address the role of the bureaucracy in providing fearless, non-partisan and fact-based advice to inform policy- and decision-making, but I'd argue it's an important role particularly given the competing interests and perspectives at play.

Simpson doesn’t pretend to have the cure for what ails Canada’s health-care system.  He proposes a number of compelling ideas and makes linkages between health-related outcomes and socio-economic factors that make his book well worth the read. His prescription goes something like this: take in as many informed debates as needed, apply more openness to creative ideas for service delivery and medical coverage, and prop up with evidence-based decision-making and resource allocation to reduce swelling.