Towards a New Professionalism in Government, Part II

I was hoping to get to the heart of how I view the future of public service professionalism. But the road turned out wordy, so I've split it into two posts, this one continuing the link between the discussion that's been going on here lately and professionalism (See: Embracing Authenticity Means Embracing Complexity). 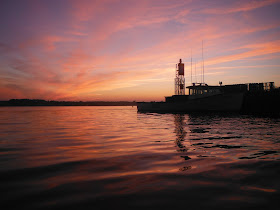 Before I bolted east for vacation (and got that photo, above), I decided that I'd explore what a new professionalism in government would look like, and prefaced it with a post on the importance of authenticity and storytelling. I wondered if it would seem like a non sequitur (See: Towards a New Professionalism in Government).

Evidently not. Ashleigh Weeden handily beat me to the segue:

The amazing by-product is that when I am grounded in my own authenticity, I am in a much better position to receive the stories of the colleagues, citizens and agencies that I work with because I am open to hearing what they have to say and not preoccupied with the mind-reading that comes from filtering what I hear and see through the voice of my own gremlins. By engaging my wholehearted self, I am better able to connect with other individuals as well as connect the dots of concepts and see patterns in the anecdotes that lead to important questions about the way we do things.

In other words, we need to be open, authentic, and genuine with those we serve. In doing so, we'll understand the human context and feedback that will motivate us to swing for the fences – to which I'll return next week. And we'll understand people's needs and perspectives, how we need to communicate, and how complex our issues really are.

Professionalism is results. Results achieved sustainably, with integrity, and with a stronger public service emerging through their achievement. In the short term, solid policy and services. In the long term, a trusted and strong public service. Remembering that neither horizon is served by working in a vacuum.

From John Ralston Saul's website, about his book Voltaire's Bastards:

A simple truth which our elites deny: far from being a moral force, reason is no more than an administrative method. Their denial has helped to turn the modern West into a vast, incomprehensible, directionless machine, run by process-minded experts - “Voltaire's bastards" - whose cult of scientific management is bereft of both sense and morality.

I've referenced Saul before (See: Left and Leaving). He both chastises technocrats for oversimplifying things from ivory towers, and – related – laments the erosion of honour, status, and trust in the Canadian Public Service over the last half century. He paints a vicious cycle of the decline of professionalism.

This is the virtuous cycle I posted a few weeks ago. I discussed how public trust through authentic interaction is key for status and, thus, attracting talent. I'd propose that we add that such interaction bolsters the cycle significantly at the performance stage as well, because it helps us understand the complexity of what we're up against.

I don't think the world is much more complex than before. Honestly. It may be faster, but the force far outweighing increasing complexity is increasing awareness of complexity. We weren't spraying DDT on fields 50 years ago because ecosystems were any less complex – we did it because we had no idea how complex they were (See: What We Don't Know).  Now we have:
And thus we have a duty to change our approach to problem solving, appreciating all that.

I feel as though we have fallen prey to various memes*. One is that we're smart enough to make decisions from Ottawa on behalf of those we're imposing them upon. We're not. The world is large; it contains multitudes.

*To be returned to next week.