Where Good Ideas Go To Die

A year ago, I wrote a post about how and why good ideas face resistance (see: Renewal and Resistance). Today we still can't swing a good idea without hitting a Clay Layer*, and I thought that it was about time to revisit it.

The Clay Layer is this amorphous, eternal layer in the middle of organizations "through which no light shall pass,” and to which no one admits being a part of. It is where communications and good ideas go to die. People send ideas on journeys down or up the chain, seemingly with all the supplies needed, but never hear word from the destination.

Here's how it works: The President of an organization has a Great Idea. They instruct their lieutenants, the VPs, to make it happen. The VPs turn to the directors, who tell the managers, who tell the supervisors, who implement it with their employees.

In some organizations the Clay Layer may actually be a management layer. In others, it could be people, policies, or processes. But my contention was that it is more so a mathematical inevitability.

Hierarchies and ideas just don't get along. If there is anything less than unconditional support for a given idea, every layer in an organization represents an opportunity for support to break down. Worse, the chance for resistance, or non-support, at each layer compounds, multiplied by each additional layer.

So, the chance of meaningful implementation of that President's Great Idea is equal to:

Where x is the chance of support and y is the number of nodes in a hierarchy. It's y-1 because presumably, the President has 100% support for the idea.

Expanding this example, with 6 nodes (a President as node 1 and an employee as node 6), and a 85% (dare I say high?) chance of support for an idea:

So, 85% of the people in this organization would individually, if they ever heard about it, support the President's idea. But when the machine manufacturing it is a hierarchy, it has less than a fifty-fifty shot at success. 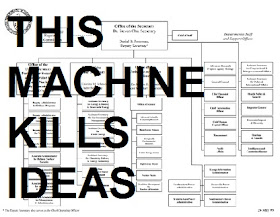 The Clay Layer isn't a management layer, it's a function of the organizational system. So if there is a shred of truth in this, the approach seems clear as we try to get Great Ideas' success rates as close as possible to 100%:
But there's an unfortunate corollary to our equation. The President will systematically underestimate how much they need to reinforce ideas (maximize x), because progress reporting has the same flaw: any inaccuracies in reporting compound at each level of the hierarchy. And every node has an incentive to overstate their level of support, and the level of success.

*Nick has written about the Clay Layer at least once before.

Actually, for that matter he also wrote a post called Where Good Ideas Go To Live And/Or Die.
Share