A couple weeks ago I challenged Twitter to do something, anything, out of the ordinary that embodied the workplace culture they wanted to see. I did a few things, none original:
(On that last one - I had some kicking around. Er... I may or may not have submitted a poster-sized document to Blueprint 2020.) 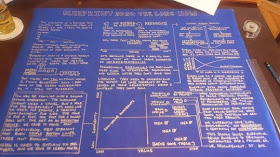 Aside from what each addition to my office specifically does, the major goal for me was starting conversations. I would like colleagues to see something that interests them on the whiteboard or blueprint and ask about it.

It's taking a minute to think differently about your workplace. Nick has suggested this before (see: Cubicle Hacking 101), and everyone should read Spydergrrl's excellent talk at GTEC in October about Hacking Your Way to an Agile Organization.

And today, of all days, is an auspicious one.

So two questions: what could you do to your physical surroundings today that better fits the workplace you want, when you get back in 2014? And more importantly, what are you going to do, on the first day back in the new year, that makes your workplace better?

Happy Holidays, See you in the New Year

The title pretty much says it all but if you are looking for something interesting to read, have a look at this report on The Emergence of Civic Tech: Investment in a Growing Field.

Get Meta on Life

The elegant beauty of Kent's most recent reflection (see: Get Meta on Engagement) is that, well beyond the realm of stakeholders, its logic is applicable to the realm of self.

Life — I am learning — is about far more than being available. It's about contextualizing that availability within a larger narrative. It's about taking the time to thoughtfully examine why you think a certain way and ultimately how that informs your decision making.

Exposing oneself to new experiences is then critical. If your experience is singular then your context is narrow. We often forget this and accept our own experience as an experience shared by others, forgetting that divergence, innovation, and personal growth all happen on the boundaries of our experiences, not at their core.

Perhaps this is top of mind having just returned from the Yukon, working, living and socializing under very different circumstances than those I am accustomed to. I met dozens of people, all with unique histories, deeply committed to their work and marked by a heartfelt hope for the future. I've had the privilege of meeting thousands of civil servants from all over North America and I can say with complete and utter confidence that I have never met a more collegial team than the one I spent two days with in the North*.

When someone questioned why I would voluntarily go to the North in December (on Facebook) the answer was simple: any opportunity for a policy person like me to step outside the Ottawa bubble and work directly with stakeholders is an absolute no-brainer.

And, again, it's a no brainer for precisely the same reasons Kent articulated in his piece this week. A periodic testing of assumptions — in work or in life — is useful. Seek them out, don't shy away from them.

In other words, get meta on life.

*As an aside, the North is an incredibly important part of our Canadian identity and I would encourage you to visit it at least once in your lifetime. I honestly think it will make you a better Canadian. Possibly even a better person.
No comments:
Share

Get Meta on Engagement


This is a Story as an Introduction, and it is as Long as the Rest of the Post

For a while I've held the opinion that public officials should be blogging or writing Op-Eds about decision rationale and key strategies. This is for several reasons: to get feedback with which to make decisions, to expose unforeseen adverse effects, but perhaps most importantly, to get past mere information availability and into actual transparency. Both public officials and citizens would be better off receiving information with both context and some level of thoughtful presentation.

Which I why I applaud initiatives like St. John's Councillor Dave Lane's blog. I can't speak for him as a city Councillor, but I'm a big fan of his recent 566-word post entitled Yes, I voted for a propane tank. Spoiler alert: it explains why he voted to allow a large propane tank to be built on the waterfront. Propane tanks aren't usually popular, but in context, his decision seems incredibly reasonable.

St. John's harbour. It's lovely, and you should go. Don't miss Raymond's, it's epic.

But that's all an aside. In his post from the day before that, Lane hit on a great lesson for stakeholder engagement. The city is launching a public engagement initiative, and they're starting with the question:

"How would you like the City of St. John's to engage?"

It's simply a periodic testing of the assumptions on which your processes rest. And it's useful. Get meta.

Photo by Aconcagua (Own work) [GFDL (http://www.gnu.org/copyleft/fdl.html) or CC-BY-SA-3.0 (http://creativecommons.org/licenses/by-sa/3.0)], via Wikimedia Commons
No comments:
Share

I occasionally still use my old blog for a release valve. On Sunday I wrote about embracing our contradictions, and if you're curious: Large. Contains Multitudes. It could as easily apply to how we approach our professional lives, but I decided to keep it general.

Generally, I avoid discussing my specific job on this blog. While I'm, naturally, influenced by the environment I'm working in, I try to keep my views rather separate from those of my organization. So I avoided weighing in on Nick's recent GCpedia posts (see: GCpedia: a David Among Goliaths and Embrace GCpedia as a Technological David), even though it's a near and dear topic - I had been working on the team that supports GCpedia and GCconnex since June.

Since joining the public service I've developed a lot of "ought" statements about the way the public service should work. Working openly is one of them. But while working on GCpedia and GCconnex, openness on those platforms is the only option (and I'm sure I still have a lot to learn and much to improve). So even a few months ago I found myself looking forward to learning how to apply ideas to other positions and roles, and the challenges in doing so.

As it happens, last week I was reassigned to a new portfolio. Should be really interesting, and should take the need for openness to a new level. So a new adventure, the need to walk the walk, and a new walk to learn.
No comments:
Share
‹
›
Home
View web version