This quote from South by Southwest was making the rounds yesterday: 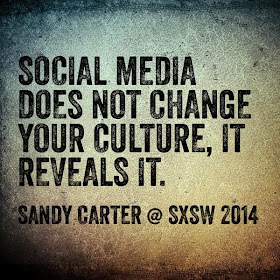 Which dovetails with Nick's post last week (see: Dragon's Dens, Hackathons, and Innovation Labs. Nick questioned whether such approaches are being used as innovation band-aids, plastered over more fundamental problems:

If pressed to offer a TL;DR of the problem I would say that the core challenge facing public sector institutions right now is that industrial age organizational models don't jive with digital age cultures and technologies.

I don't know if I can fully back the idea that it's the core challenge, but I'd agree that it's a major one (see: We Don't Make Widgets Any More or Healthcare.gov as a Case Study in the Digital Analog Divide).

We mistake the use of digital technology as evidence that we know how to use digital technology. Really, we're still very much so learning this world and discovering its potential and limits. We absolutely should continue to push the boundaries, but it strikes me that we're undervaluing reflection on what our recent history has meant.

And, for that matter, what it has not meant.

Humans are still human, if not more human than ever. Mid-century economic models assuming rational actors with perfect information have given way to the understanding that humans are not just irrational, but predictably irrational. Face-to-face canvassing impacts voter turnout at 5-8 times the rate that mail or phone calls do. Humans respond to what is meaningful to them, particularly connections to other humans.

With that in mind, here's a heuristic I've been considering. As government representatives and as employees of large organizations, we're faced with many situations in which we want to get feedback from stakeholders and colleagues. When thinking about how to design that interaction, consider how you'd ask a good friend the same question. If the answer is sitting down for coffee, email probably isn't the best approach. It might be the practical approach all things considered, but make sure you're aware of what you're losing in going a particular route.

As Nick asked, it's "What does governance look like in a digital era?" Not, "How do we use digital in governance?" Governance is still the key element of the idea. Some fundamental assumptions about governance have changed; many haven't. In the end, it's still about what people do.

Consider the Sandy Carter quote. Similarly, technology has helped people unearth many, many problems that always existed, but were hard to see. And the inadequacies of many of our solutions.

Technology will not revolutionize government, society, or democracy. But people might. Technology might help them realize that they have to, or help them find the people and tools they need to do it.
Share