The Value of People


Editors have figured out that there's more going on in documents than people can adequately, reliably process all at once. The standard practice is to take multiple passes, each time looking through a different lens. I was taught to take three cracks at important documents:

The field of business administration teaches something similar, providing frameworks and guidance for how to think about problems: SWOT analyses, risk matrices, etc. My first manager looked at every new problem through the below framework, thinking about the needs and constraints from each lens: 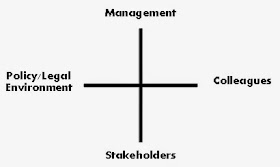 The decision-making lens I tend to advocate for is the more humanistic one: starting from a position of trust, looking for positive-sum outcomes, and appreciating soft and long-term benefits from actions. But in actuality, there is a different lens I would make mandatory for every decision, ever. It would be taking a moment to go completely cold, rational, and economical, and to think of the people within organizations as dollar figures. Just for a moment.

Statscan put yearly salaries for professional/knowledge worker jobs around $62,000 in 2014. Between benefits and pensions I think I can conservatively put the total compensation cost at $80,000 as a working estimate*.

Some examples in which this lens may be enlightening:

It is easy to view human resources as sunk costs: past expenditures that should have no bearing on present decision making. It is not so. We should be building decision frameworks that encourage us to consider our stewardship role for the people behind organizations - at least for a moment, as one lens of several. Then taking other passes over problems, with other lenses. Editors give documents this level of respect.