Last week Nick posted about innovation and Adobe's Kickbox (see: the post). He suggested that government try the employee-led, many-experiments model alongside the innovation labs model, but noted that the pressure to succeed may limit governments' experimentation options. In the comments, Blaise noted that the government is trying many different models, and the question is instead the extent to which they learn from each other.

There's wisdom - and not necessarily disagreement - in both takes. They're both talking about experimentation on innovation models themselves, not project innovation within innovation labs.

This macro-level comparative analysis is possible - it has been done before. Back in 2004, Charles O’Reilly and Michael Tushman researched innovation and found that organizational structure was a striking predictor of success. They compared four models (the Emerging Business box being analogous to our innovation labs): 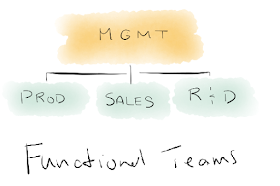 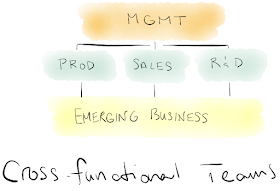 Here's what they found:

More than 90% of those using the ambidextrous structure succeeded in their attempts, while none of the cross-functional or unsupported teams, and only 25% of those using functional designs, reached their goals.

This is not a perfect analogy - these businesses are private sector organizations pursuing, largely, product innovations. But it proves two things: one, that organizational design and discrete factors can massively influence outcomes, and two, that comparative analysis of innovation models is possible.

It'd be relatively easy to create a rough framework of government innovation labs such that we could look back in a year and critically assess successful characteristics and trends. It would make it easier for labs' genetic material to mix, and allow them to productively evolve into future iterations.

And include any number of other variables: how projects are approved, how budgets are structured, what projects were undertaken, how many, and so on. Labs could be assessed regularly, perhaps on an abstract colour scale (say, from Cadmium Red to Burnt Umber) to avoid strict rankings.

The point wouldn't be a thorough understanding of individual labs, but a rough, easy-to-generate overview from which to generate hypotheses about general conditions for innovation lab success.

All of which could maybe bring us closer to the goal of standardizing innovation.

Thoughts? If there's any interest I think we could hack this together on GCconnex pretty quickly.
Share