Last week I appropriated Clay Christensen's Innovator's dilemma to the world of policy innovation in an attempt to see if the model/thinking holds (See: The Policy Innovator's Dilemma). At a high level I think it generally holds that the dilemma facing the policy innovator is whether or not they ought to pursue sustaining innovations or disruptive innovations. Innovation rhetoric aside, its a leadership decision about whether or not the organization is going to direct its scarce resources towards generating policy process improvements or new policy thinking. The rest of the application is interesting but I think at its core the above statement is the kernel most worth pursuing.

A friend of mine reflected (by email) on how it didn't seem like a true dilemma in a risk-averse public service culture. The idea he and I unpacked over email was that risk aversion eliminates disruption as an option, thereby negating the either-or element, resolving the dilemma and leaving public servants to focus solely on policy process improvements. In other words – and this is likely nothing new – risk aversion is the root of incremental approaches to policy innovation.

Who or what ultimately determines which innovation strategy to pursue?

Jeff on the other hand left a comment (rebutted by Angela) that argued the dilemma was at the feet of Ministers. I found this too to be an interesting perspective. However, I don't think its as cut and dried. For example, if you parse the PM's Guide for Ministers and Ministers of State (2011) you will see (among many other things) that:


In sum, plain English and chronology:


The PM sets the broader direction. Cabinet brings greater specificity to that policy direction and ensures coherence. Deputies serve as the principal source of policy advice to Ministers. Public servants provide professional and nonpartisan advice to their Deputies.

To me this looks like a fairly collaborative approach to policy making and while it may be technically true that ultimately the final decision-making powers lie at the Cabinet table there are a whole series of smaller decisions diffused across the system that significantly impact what actually makes it to that table in the first place. To me this would seem to indicate that decisions about which innovation strategies are similarly diffused across the policy making process. If this is true than a lack of disruptive policy options could be attributed to the fact that no one along the supply chain is raising them or that somewhere along the supply chain they are actively being suppressed. The former option jives with the above argument about risk aversion and seems likely. The latter however seems far less likely, in my experience the active suppression of policy ideas is more of a ghost story than a reality (queue the naysayers who've been told to stay in their box).

Which brings me to the rub

I said in the opening that essentially the policy innovator's dilemma comes down to a leadership decision about whether or not the organization is going to direct its scarce resources towards generating policy process improvements or new policy thinking. Where I think we've landed after today's discussion is that those leadership decisions aren't concentrated in the hands of the few but rather diffused across a complex system and risk-averse culture.

In many ways these are enduring themes that I've written about in the past and this is where I think innovation meets fearless advice and loyal implementation. Back in 2011 I wrote about fairly well read post On fearless advice and loyal implementation. At the time I was writing about the context of government culture writ large but I think it also applies to how we think about and approach innovation, here's an excerpt:


I think the problem is that we have collectively misinterpreted the significance and underestimated the opportunities we have to effect our work culture and sub-cultures, regardless of where we work or what we work on. We mistakenly think of fearless advice as something that only the people at the very top of the organization do; something that is reserved for private meetings between Deputies and their Ministers. In fact, I think that speaking truth to power (fearless advice and loyal implementation) more often means pushing against the small "p" office politics and the small "c" culture of the bureaucracy. In other words, fearless advice isn't reserved for ministerial briefings, but rather happens in the hallways, over cubicle walls, and in the lunch rooms among peers.

Think of it in terms of the long tail: 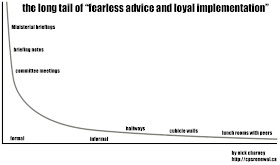 The idea here being that new disruptive policy ideas can emerge from anywhere along the long tail, to which I suppose I still only have one remaining question: why aren't they?