At a Community of Federal Regulators workshop last month, the presentation material led a handful of us in the audience to a conversation about social media and how government can get past using it as a "push" mechanism and into two-way dialogue. Which is not just a Canadian thing; Ryan Androsoff and the OECD found the same worldwide:


"[W]hile governments are increasingly using social media, many are still using it primarily as a traditional communications mechanism rather than for opening up policy processes or transforming public service delivery."

I found myself saying that "I don't think government will ever really get there," and wanted to explain that comment. It's a matter of where "there" really is, or, as Ryan put it, "What's the ideal state for social media in government?"

For starters, if the social media goal is something like profit, reach, or providing a supplementary channel, then interactivity and sociality may really just be means to an end. In that case, one-way messaging might work perfectly, even if it offends social media purists, and the story ends there.

But let's assume that the goal is as Ryan wrote in the above quote, to open up policy processes or transform service delivery. In this case, responsiveness and interactivity become central.

And if that's the there, I think government can get there - just in a limited and particular set of circumstances.

But first: why aren't we there yet?

The worldwide state of the practice is still one-way in government, which means that there are more barriers to genuinely interactive government social media than it may have first seemed (or that it's not as attractive a goal). It might be easy to point to common culprits: maybe it’s just culture change that hasn’t taken root yet. Maybe it’s approval processes that make it hard to be “social” and responsive - it’s hard to carry on a conversation while routing responses through half a dozen people, and the time investment smothers the engagement benefit. And so on.

But the state of practice is similar in the private sector. There’s no shortage of examples of really clever back-and-forths between companies and customers, but that's the exception, not the rule. Where companies do get social, it tends to fall under customer service: that is, just an alternative channel to calls or emails to complain, which leads to tightly and extensively scripted interactions. Anything more in-depth and the company's social media team would have to go digging for answers, which breaks the responsiveness element.

Which is more like the government reality. The Public Inquiries model is a good analogy. Questions from the public come in to a central office. That team has a solid map of the institution and they triage questions as best they can for response - in some cases to multiple teams, just in case. In some cases, the answers are a few pages long, and (reasonably) take a couple days to provide.

Government could try to ask general, light questions about broad thoughts on policy or services via social media, such that such in-depth knowledge is not needed, but it'll inevitably get to a complicated request or question. Then the only response available is "That's interesting, we'll consider that and get back to you" and suddenly the people engaging are reminded that they're not talking to the people responsible, and it breaks the spell.

The TL;DR: for this section is that people talk to people, not organizations, and it's impossible to have a conversation that hypothetically could include everything that an organization "knows." The departmental level is too big for conversation.

When and where can government social media get social?

I've been considering three axes that we can play with:
For source, the question is to what extent the engagement is led by programs/policy/services versus communications, and for today the long story short is that you need both involved.

For the others, let's imagine a grid like this: 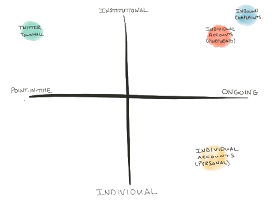 From left to right we have the length of time of social media interactions: point-in-time, like hour-long Twitter townhalls (that usually convene a "war room" of comms professionals and subject matter experts to support) to ongoing, like how complaints and comments can come in at any time.

At the top we have large, institutional, and official social media interactions: again, townhalls, but also announcements, senior executive corporate accounts, and the Public Inquiries clearinghouse model applied to social media. At the bottom, we have individual public servants using social media for work purposes (which happens mostly unofficially in the Government of Canada and more officially in some other counties).

How social media in government can be social:

I think government should instead look at expanding the use of models that cover the middle ground. For instance:
Are there other models in use that are working well now? Any other ways to explore the middle ground?
Share