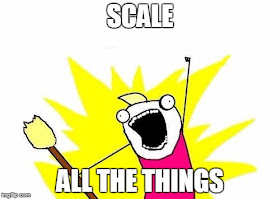 Earlier this week I sat on a panel at the Canada School of Public of Service with my good friend (and all around great person) Amanda Clarke (Assistant Professor, Carleton University) and Daniel Watson (Chief Executive Officer, Parks Canada) to help launch the Policy Community Project. At one point in our conversation we started talking about the need to 'volunteer' on corporate initiatives that may not have a direct connection with your work but still creates value for the organization. It was advice that many panelists, including myself, drove home. That said, the use of the word volunteer (actually 'bénévole') seemed to hit a nerve. There was a bit of push back on the idea that 'volunteering' was the answer. For some the idea that one would need to volunteer is symptomatic of the problem. The argument being that the organizational culture shouldn't be one where you have to volunteer in order to get better access to developmental opportunities, get noticed, get engaged, derive more meaning from your work, etc.

At first blush it's a fair point but upon closer reflection not necessarily one I can fully get behind. People who have leaned in further and taken on more have always had (and likely will continue to always have) better access to all of those things. It's hard to argue with someone being rewarded for putting in more time and effort then their counterparts. That's the basis of merit and merit is important. However, that doesn't mean that we shouldn't aspire to improving the natural resting place or cultural norms (e.g. needing to volunteer) wherever they are inert, and to generally being better corporate citizens all around. What I found absolutely fascinating was that as the conversation evolved a common thread started to emerge around the need to institutionalize (scale) small innovative pilots that created alternative opportunity streams to volunteering and weave them more purposefully into the fabric of the organization (e.g. NRCan's Micro-missions). The inclination to scale and regularize this type of innovation seems to make sense but when you take a step back it raises some serious questions. What makes the initiative 'innovative' in the first place? Likely is falls outside the traditional reach or capabilities of the organization and if being outside the auto-immune response of the bureaucracy is the key enabling condition that underpins the innovation then surely bringing it into the organization will kill it. In other words, if it could have been done within the confines of the existing system it would have. What makes it innovative is that it isn't beholden to the same set of rules/conditions/cultures/expectations/etc that everything else is.

I still remember (politely) arguing with David Eaves about the future of GCPedia (this was years ago now). His view was that any influx of cash and/or further integration into the institutional frame would undermine (kill) the innovative aspects of the project. At the time I disagreed but in retrospect I think he might have been right. The time simply wasn't right yet to try to force GCPedia into an institutional frame that wasn't ready to absorb it. A lot has changed since then. GCPedia still exists and while it's not a perfect fit, questions of its utility are largely resolved and it still represents significant and untapped potential. (Caveat: did you know that GCPedia can parse HTML, Java, and CSS, ostensibly making it not only a great place for interdepartmental collaboration but also (almost?) a fully functional web development environment.)

Understandably, there's a lot of interest in "scaling innovation" but the truth of the matter is that knowing what to scale and when to scale it is not something that itself can be done at scale. It takes a whole lot of work to identify and prepare receptor sites to receive innovation, to identify competing processes (and kill them) and to anticipate how the rest of the organization will re-organize around the changes. Furthermore much of what frustrates people working in large organizations is actually those things that already exist at scale and inherent lack the flexibility that comes with them.

In short, one does not simply scale all the things. 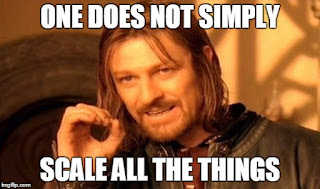