If we were to place digital citizen engagement on the Hype Cycle, I suspect we'd be pinning it in the trough of disillusionment.

The Hype Cycle idea is this: for any emerging idea or technology, it goes through a period of inflated expectations, then a trough in which people think it won't amount to anything, and then it settles into the "plateau of productivity" somewhere between the two.

Five years ago, people were really excited about the idea of digital citizen engagement: nation-wide discourse on the topics of the day, free to all, on a level playing field. Instead we've gotten this: 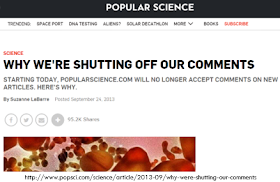 Publications are disabling comments forums because the quality of the discourse is so low. The experts in the field are very much so in the design and research stage, and the most sophisticated online deliberation models (like MIT's Deliberatorium) are still being tweaked and studied.

And while governments have had to react to powerful political mobilization and public will on social media (read Vox's take on How the Internet is Disrupting Politics), government-led digital citizen engagement has hardly become a game-changer for governance.

Digital citizen engagement is going to be a whole big thing

Yet, I'm pretty confident that digital citizen engagement will be hugely important in the future. Not because it's better than existing analog or in-person ways of getting citizens' ideas and feedback, but despite the fact that it's demonstrably worse.

MOOCs - Massive, Open, Online Courses - are the perfect analogy. North of 90% of people that register don't finish (though because they're new(ish), people will sign up for novelty; there'll be less of that in the future (see: Hype Cycles)). Deloitte's resident predictions expert, Duncan Stewart, has listed all of the many problems with MOOCs and still concludes that they'll still be a huge part of education and even credentials in the future. It's simply because university keeps getting more expensive, especially relative to entry-level salaries. The nexus of market forces demand the distribution model that only the internet allows.

Likewise, digital citizen engagement is, on balance, worse than the suite of options governments have to engage in-person. It's less engaging, less conducive to developing trust and relationships, and poorly suited to dissecting complex issues. But, it's the only way to even approach fairness and scale, and I think that this imperative will overpower any limitations or weaknesses.

Canada has a population of ~35M people. You can provide an opportunity for the first 12.7M to engage with government by visiting only 5 cities. But after that it gets tricky, and the next 95 biggest urban centres only get you 10.7M people. And after that, there's still 11.7M Canadians to go.

One, the level playing field of the internet isn't actually level. There are still massive distributional biases in internet use*, leisure time, civic literacy, trust in government, and cultures of deference or irreverence. These will need to systematically managed. (Even municipal 311 systems have distributional biases; even big data isn't always full data.)

Two, digital citizen engagement tools are getting better, What's available to the Government of Canada today (via standing offers) is a huge improvement over only a few years ago. And the more these tools get used, the better they'll get (and the bigger the market will be for bilingual, accessible platforms). And the better people will get at using them. 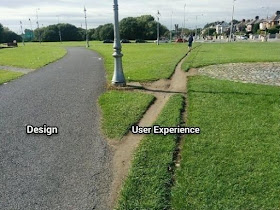 If you aren't familiar with the idiom paving the cowpaths it essentially means looking to the paths that are already being formed by behaviours and then formalizing them rather than creating some arbitrary or artificial structure that ignores how people actually behave inside organizations.

Cowpaths are akin to the problem of design versus user experience highlighted in the image to the left. People are supposed to be walking the path but the path curves away from destination so they forge a more direct route to their destination. The cowpath metaphor also accurately describes much of the policy innovation ecosystem. People are out forging their own paths -- for example, with successful pilots -- and leaving trails behind them that others can follow. The very existence of the cowpath gives rise to the question: should or should we not simply pave them?

Within the policy innovation ecosystem the question of paving the cowpaths is one that seems to invoke a wide range of responses (See also: On Scaling Innovation). Some prefer to continue to quietly walk the path, and find success for themselves and their initiatives. Others choose to try to be a champion for change at the organization or systems level and take on the burden of rolling that boulder up the hill. Most of the people I've spoken to about this tend to land on the idea that actively paving the cowpaths is the right thing to do but tend to shy away from it when it comes time to lean into the problem. Its not a criticism so much as an observation. There's a myriad of different factors at play -- incentives, zones of control, social capital, degree of difficulty, scale of the change, and interdependent and/or cascading processes, to name but a few -- and its hard to fault individuals for doing the mental math and deciding its best to keep walking the path rather than paving it. Especially since its not a one sided problem; there needs to be both push (i.e. someone rolling the boulder up the hill) and pull (i.e. someone at the top demanding that people do so); in other words supply needs demand. Finally, if we assume that policy innovation cowpaths have natural tipping points (cow tipping pun!) then actually paving them doesn't seem to make sense because at that point the path is so well traveled that they are no longer risky. Investing scarce resources in paving an established cowpath could be a hard sell.

I can offer only one defence for paving them: eliminating the possibility of the backslide. After all, "[Change] requires sealing off the way backwards, not simply pointing the way forwards" (See: The Fine Art of Burning Your Ships).
No comments:
Share

A year ago a friend joined a new government organization, and one of the things she was struck by was how frank, honest, and transparent the external communications were.

Since then, my friend started writing a lot of the deputy head’s speeches. Not as a part of a communications branch, but as a strategic planner. At which point one of the explanations for the frank communications became clear: after a first draft, she sits in the deputy head’s office and talks it out with them to make edits. Just the two of them, while the four layers of management in between do their jobs elsewhere.

The public service is risk-averse, they say. And when these people - whomever they are - say it, they usually mean it in a bad way: as a barrier to innovation, as a bottleneck to information-sharing or stakeholder engagement, or as a tendency to opt for safe and uncontroversial policy options when a much better policy option carries some chance of embarrassment.

I’d like to add a boring and functional possible explanation for that, alongside the usual slate of media, watchdogs, auditors, and career protection. I’d suggest that risk-aversion is a borderline inevitable function of how we approve things.

Here’s the long story short:
All of which creates powerful incentives towards boring, safe, and precedented recommendations and external communications. There’s no time or mechanism to explore options and explain complex rationale.

Getting back to my speechwriter friend, to draft a frank and honest speech in an approval-chain/game-of-telephone system, she’d either need to send recommendations up long before drafting the speech and get clear parameters that all approvers would abide by, or she’d have to send two versions of the speech: one safe and “approvable,” and one frank and honest. And no one has time for either approach.

Her example provides one of the possible solutions: connecting the subject matter experts and the decision-makers (in many places around government, this already happens). Which has its downsides, sure. Analysts would have to learn an entirely new bedside manner, and some would be better at it than others. But that’s just a learning curve. And there’d be a lot more subject matter expertise in the room when decisions are made - which I think is a better deal for both sides of the table.


There's a conference program -- the Canadian Open Dialogue Forum -- that caught my eye earlier this week. The conference is trying to answer the question How can we realize the potential of open government in today's policy making environment?

It's a good question that likely merits further reflection. How we define the potential of open government is likely in flux as the new administration continues to refine its public policy agenda and distance itself from the previous administration. Given what I can discern about the organizers, the speakers and overall agenda, the conference could offer a unique opportunity to influence that refinement; especially on anything that relates to the broad mandate letter commitment, which as Kent rightly points out all being parsed all around town right now (See: An Honest Question on Responsible Government). To wit:


We have also committed to set a higher bar for openness and transparency in government. It is time to shine more light on government to ensure it remains focused on the people it serves. Government and its information should be open by default. If we want Canadians to trust their government, we need a government that trusts Canadians. It is important that we acknowledge mistakes when we make them. Canadians do not expect us to be perfect – they expect us to be honest, open, and sincere in our efforts to serve the public interest.

Not to mention the more specific ones:


Moreover, having spoken with one of the principal organizers (a friend of mine) I can say that a lot of thought (and some enabling technology) has gone into trying to find ways to facilitate dialogue and co-creation with and among participants to bring them to ground on the conference theme. It's something that I've tried to architect in the past -- albeit with the old school technology of table guides and dedicated time for discussion and reporting out -- so I can say that it is a fairly ambitious undertaking that can produce some interesting insights and identify talent and/or expertise.

Hopefully there's room for discussions about the need for greater experimentation in policy development (See: Experimenting with Policy Development), about the relative maturity/immaturity of online tools for public engagement (See: Thinking, Fast and Slow about Online Public Engagement) and on the organizing principles of policy making in a digital era (See: On Organizing Principles: Policy or Delivery). These discussions are often too distributed to have significant impact and could benefit from catalyzing events such as these.

If you are in Ottawa on March 31/April 1 you might want to check it out.
No comments:
Share

What has changed? (now with answers)


We have a tendency to focus on our to-do lists, and summarily wipe from memory those items we've accomplished and crossed off. So a couple weeks ago I asked "What has changed?" - referring to the public service - and invited people to reflect on the crossed-off items in their experience. Things that may seem small on their own, but combined with every other tiny step represent a lot of growth and change.

The invitation was both rhetorical and literal, and I'd like to share back some of answers people shared. Thank you to everyone who weighed in.

Note: I did omit a few additions (some negative), only because there's a difference between a public Google doc and a blog post to which I'm going to draw attention and I wanted to err on the side of caution for others. Interestingly, one of those omissions was pretty much the polar opposite to the bullets on how the PS has "evolved." - Kent
No comments:
Share
‹
›
Home
View web version