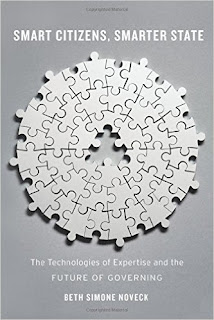 Smart Citizens, Smarter State makes the case that governments are woefully under-using the knowledge, expertise, and talents of their citizens - and that bridging that gap is “the future of governing.”

Author Beth Simone Noveck has been at the forefront of changing trends in government and governance for a while now. She’s the Director of NYU’s Governance Lab, and led the U.S. Open Government initiative as Deputy Chief Technology Officer of the White House from 2009-2011.

Having been at the forefront, she draws on a variety of case studies and examples of how government got to novel solutions through more engagement with the public, which covered a broad spectrum of models:

To add to those models (some of which were covered in her 2009 book Wiki Government), Noveck lays out the concept of “technologies of expertise,” which go beyond the platforms that allow governments to communicate back-and-forth digitally with citizens and into models that help government officials not only find specific types of experts, but also proof and demonstration that those people actually do possess the expertise they claim to. For instance, Github is a website that hosts code repositories, but it also tracks users’ actions and how much they contribute to different coding projects. Or, this proof can be offered through reputation (e.g., eBay ratings), certification (e.g., online education programs), or badging (e.g., Code Academy).

So is this the future of governance?


Overall, I enjoyed Noveck’s book, though there were a few chapters that where more US-centric and thus less germain to the Canadian experience (but one can hardly hold that against her). Here’s a few insights from the book (including page numbers) that I think are worth sharing, followed by my commentary.

Finally, if you read anything from the book, read pages 144-145. It's insightful and aligns with how the policy innovation and experimentation winds are blowing in Ottawa right now. Here’s a snippet:

“Although there is a lot of writing about improving the use of science in policymaking, Nudge work included, there is still little attention to the science of policymaking itself and only the whispers of an effort to test empirically new ways of deciding and of solving problems. Even if we vary where and how and at what level of government we restrict abortion or legalize prostitution or change the design of the forms used to enroll people in social programs, we do not often question the underlying assumptions about how we make these policies in the first place…

Examining the choice between policies arguably helps to spur a culture of experimentation, but it does not automatically lead to an assessment of the ways in which we actually make policy. To be clear, the Nudge Units often test choices between policies, or sometimes test the the impact of changing default rules, such as how and when to enroll people in a social service. Typically however, they do not experiment with approaches to making policy. They do not examine how governance innovations, such as open data, prize-backed challenges, crowdsourcing, or expert networking translate into results in real people’s lives …

The first step toward implementing smarter governance, therefore, is to develop an agenda for research and experimentation ”

I want to start by doubling down on Nick’s fourth point, with some nods to his first. Large-scale digital citizen engagement is still in its Myspace phase, and we’ll need to keep designing and experimenting to get to models and platforms that work really well. No one's really cracked the online deliberative dialogue nut. Here's a solid, if dated, overview, and here's MIT's work, but the long story short is: polarization around views, in-person power dynamics being replicated online, the order and timing of comments influencing debates, and people sometimes just being lousy.

That said, the exceptions prove the rule for intentional design: for crowdsourcing, some of the really successful case studies are incredibly specific to a particular activity (e.g., spotting supernovae or folding proteins).

During our book club discussion on this one we spent a lot of time on questions about the value of citizen engagement, and the perceived success of governments at both soliciting and using feedback and ideas. My reaction tends to be along these lines: of course it will be of benefit, in many cases, to work with people outside of government to solve public problems, whether that means niche experts, demographically representative samples, or broad public engagement. The question is knowing when to do it, and being able to design the approach such that it’s worthwhile for everyone involved. Subtitles of books like this tend to be hyperbolic (probably well beyond the authors’ claims), so I’d nuance the line to “part of the future of governing.”

Lastly, there’s one area where I tend to be very skeptical, which is the “technologies of expertise” that Noveck refers to: that is, platforms that are designed to surface experts and make them findable by governments. I suspect that if you dig beneath the connections made through platforms that allow people to use, and publicly prove, expertise (e.g., Github, Stack Overflow, Wikipedia, etc.) the lines will map to the interpersonal social networks of the people using those platforms. This argument could be a little chicken-and-egg (when the relationships start virtually over shared interests), but the social context isn’t going away.

From an impartiality perspective, this is a tad dangerous because it means it’s not a perfectly level playing field, but the relationship between government and citizens is going to grow through the aggregate relationships between citizens and government officials (see: Why Government Social Media Isn't Social (and the comments)). The Smart Citizens we're talking about will engage with government when government starts to get to know them.
Share