The transparency antidote to risk

A couple years ago my team worked on a project that got some negative attention. I'll go light on the details, but we took some criticism and my teammates got worked up, looking for ways to defend the outcomes. I had the opposite response: now we had some ammunition to do things better in the future.

Across the public sector, the meme seems to be that people are scared of transparency (e.g., open data excuse bingo). Which is, at first blush, understandable: it might mean more scrutiny, more criticism, a loss of control over the conversation.

However, there's another meme that bureaucracies are risk-adverse and that they stick to the status quo. Transparency about public programs and services reveals the risk in the way things are now, and gives decision-makers an even playing field to make decisions about change.

Here's an example. Edmonton has had a public dashboard of public policies and services for years: transit ridership, 311 call response times, growth in small and medium businesses, etc. And some are in the yellow and red, not meeting the benchmarks set. 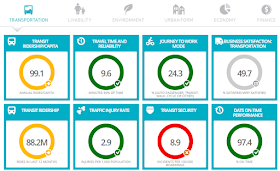 No one signs up for public service to deliver a service that doesn't meet the public's needs. Having the performance freely available on a struggling program means that the program managers will have to explain why things are the way they are, but it also means that the program will receive the support it needs to improve - or change. It's short term stress for the sake of being a part of something worthwhile in the long run.

And the public gets a better shot of getting what they need, sooner - both in terms of information and public outcomes. Where there's little transparency about current performance, potential changes from the status quo get disproportionately scrutinized. And given that even long-running activities - e.g., how governments have been doing IT - are still experiments with uncertain long-term outcomes, we need to put those activities on an equal footing with their alternatives.