A couple years back I wrote about a vicious cycle of centralized decision-making and the what it meant for executive attention on important issues. I don’t think there’s a single major issue in large organizations that doesn’t, at some level, stem from the meta-problem that the demands on executives’ time are incredible. At some point in the dissection of every systemic issue you could include “And executives don’t have the time for it.” Every major new initiative includes, as a factor for success, “senior executive support.”

I’ll recreate the same model because I think it’s still interesting. Today I’d add organizational design and I’d probably fingerpaint it, but I think it mostly holds up. 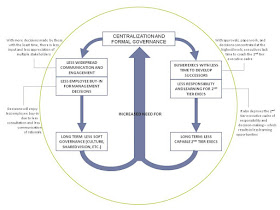 The long story short is that more time spent on content means less time on process, including coaching, big-picture thinking, and organizational design. Which ultimately leads to the need for even more centralized decision-making in the absence of experienced delegates and effective governance.

The compounding problem is that executives are structurally hamstrung from recognizing and correcting this pattern. Throughout an organization, there will be some sub-organizations with a manageable workload where everything gets dealt with. However, from the top, those organizations will look the same as those where things are falling through the cracks. Some issues that would otherwise be important will remain invisible because there’s no time to make them visible. And your delegates will start curating demands on executives' attention on their behalf out of sheer practicality - and from a smaller-picture lens - removing the ability for pattern recognition.

That is, for someone running at 100% capacity - as in, an actual maximum at, say, 80 hours per week - they’ll never know if the amount of work that should, given current systems, require their attention would actually add up to 120 hours per week. The extra 40 hours of work is impossible to see.

From the ground floor, this often results in issues that are paradoxically so important that they can only be resolved by [X] level of executive, but so unimportant that they won’t possibly make it to that level in the absence of good luck or a media article that catalyzes attention.

When this problem exists in an organization, people probably don’t - and can’t - know the extent of it.

Right now I'm doing work on digital-era governance, and there are recurring themes: collaboration, systems thinking, user-centricity. But collaboration takes time - particularly when we're talking about formal, long-term collaboration between organizations or even orders of government - and time is already an incredibly stressed resource, in ways that are very difficult to fix.