In fall 2019, I wrote my first couple posts on CPSR since September 2017, and tried to set myself a commitment device to start writing again. Which failed, and epicly. This is my first since.

I really enjoy writing, and it helped me think through things I was seeing and reading about. I felt like it was an important weekly habit. So I’ve both missed it and felt guilty for a couple years now, and tried to push myself back into the habit. (I still write, just different stuff in different places.)

I had misdiagnosed the absence as just that I’d broken the habit, and subsequently was trying the wrong fix of simply rebuilding it. After a long time, I started to get a better sense of why I wasn’t writing:

·         The stuff I wrote about and my day job became increasingly closely knit, which made critical exploration feel less appropriate

·         For personal reasons, I stepped back a bit from community spaces and events (who and which I also miss), and a lot of my posts were direct results of great conversations with people, both for reasons of insight and inspiration

The last one is of particular interest for today. I’m a generalist. For a while I felt that there was a value in exploring change and how it fit into the wider ecosystem. But as “collaborative culture” increasingly became the norm, and technological adoption went from “figuring out a tool” to “patterns for finding and figuring out the right tool, in context,” I felt I had less to say. The general trends splintered into niches, and other people had those covered better than I could. A lot of what felt like trends, changes, and innovations in public service was really more like an internet-enabled mass transfer of information across geography and contexts. We’ve gone from primarily expending effort to find information, experts, and practices, to expending effort to filter and distill it. Once that deluge settled from discovery into productivity or dismissal, it became about use in context. Less of a need, I thought, for turbo-meta trend posts.

Everyone goes through pivot points and moments of reinvention. Sometimes it’s borderline accidental, when you take on a new role and change to fill the new space.  But I suspect between the mass forced introspection of 2020 and the fact that hyperconnectivity and collaboration are no longer competitive advantages as public service and internet culture increasingly meet in the middle, there are a lot of people thinking “what’s next for me?”

I borrowed and bastardized the Three Horizons model that Policy Horizons and Blaise Hebert showed me (if you Google it, there are two models, both good, but for different things). Generally, we’d use this to explore changes to an industry, market, society, or a paradigm.

In general: the things that got us here aren’t necessarily the things we need in the future. So we draw three horizons, representing the fading past, the present in some stage of emergence, and the coming future. 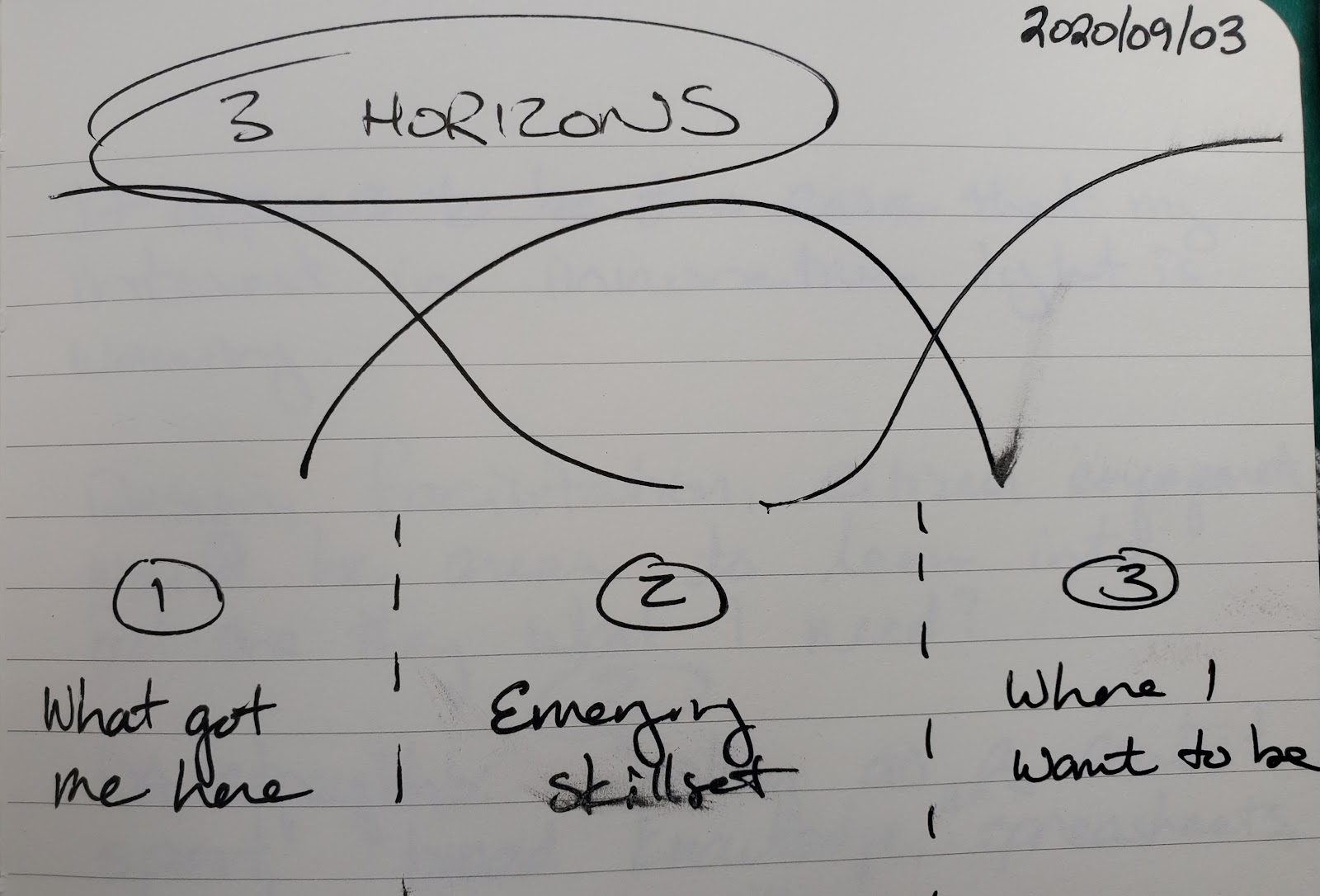 I wrote out the skills, knowledge, and behaviours that had served me in getting to where I am. Then, what I was using currently. Then, finally, what was increasing in importance, what I was finding myself using and leaning on more and more, and what I thought the future looked like.

This, of course, relies on knowing where you’re going, which was also a mystery to me. So I also used this process to explore whether the future direction was desirable and felt right.

Everyone I know has had moments where they’ve given something up for some reason and wanted to “get back into it.” Time passes, and they still haven’t, and then you eventually reflect on whether it’d be worth it now. Would you be happier if you restarted and rebuilt the habit? Or was it just that old you valued it, and now you no longer do, but it’s hanging on as part of your imagined identity?

For me, it was closer to the latter. There wasn’t much concordance between the first and third horizons. I still valued elements of the first horizon. But it wasn’t a portrait of me or my future. The third horizon felt closer to home.

This 20-minute exercise unblocked a long-standing uncertainty for me, and pointed to practical steps, gaps to fill. Might be worth a shot if you’re feeling the same.