I was strapped for a good idea for a column this week so I put out the question on twitter:

To which I got this reply (and others):

In my presentation a couple of weeks ago I mentioned the need for government departments to at least lay claim to their departmental twitter accounts, even if they weren't ready to use them. Essentially, my argument at the time was that government departments need to circumvent the problem of cybersquatting (or in this case twitter squatting) and the potential for harm to one's brand that could arise there from.

Just how easy is it for someone to lay claim to your department or agency's online namespace? About this easy.

Ok so let’s move on to a more in-depth conversation within the context of the twitter-fuelled swine flu panic, which will provide for a more interesting discussion.

While it is obvious that you cannot catch swine flu from Twitter, what you can catch is a greater understanding of the importance of Twitter's ability to spread information quickly, and the subsequent need for government departments and agencies to use Twitter to help shape that spread.

As Evgeny Morozov, a fellow at the Open Society Institute in New York puts it:

Here is a tough question to communication experts out there: how do we reach the digital natives out there, especially those who are only accessible via Facebook and Twitter feeds? The problem is that while thousands of concerned and misinformed individuals took to Twitter to ventilate their fears, government and its agencies were still painfully missing from the social media space; the Twitter of account of Centers for Disease Control and Prevention was posting updates once in a few hours -- and that was probably the only really trustworthy source people could turn to online.

Before I proceed I want to be clear that what follows is by no means intended to be a criticism of PHAC or their handling of the Swine Flu situation. I am simply putting on a citizen engagement via social media observer hat and doing some preliminary and hypothetical analysis.

Interestingly, the Public Health Agency of Canada (PHAC) is already on Twitter. Even more interesting is that PHAC's Twitter account was actually created back in September 18, 2008: 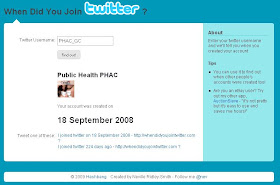 Second, it would seem that their first tweet didn't occur until April 28th:

I can only speculate that the decision to start actively using twitter (rather then just idling the account) has something to do with the perceived demand/need to provide more reliable information on the swine flu via twitter.

Morozov again has some insight:

... In an ideal world, [government organizations] would have established ownership of most online conversations from the very beginning, posting updates as often as they can. Instead, they are now faced with the prospect of thousands of really fearful citizens, all armed with their own mini-platforms to broadcast their fears -- which may cost it dearly in the long term.

The question of whether we need to somehow alter our global information flows during global pandemics is not a trivial one. A recent New York Times piece highlighted how a growing number of corporations like Starbucks, Dell, and Whole Foods are turning to Twitter to monitor and partially shape conversation about particular brands or products. What the piece failed to mention was that conversations about more serious topics (like pandemics- and their tragic consequences) could be shaped as well.

I think that there are three interrelated things worth discussing within the context of PHAC's use of Twitter to disseminate information about Swine Flu, they are (1) frequency, (2) conversation, and (3) trending.

PHAC's timeline at the time of writing this column contains seven (7) tweets - all linking to their website. My assumption is that PHAC is only using (or has only approved the use of) Twitter to drive people to press releases. Yet, given the amount of the discussion on Twitter about Swine Flu, a low number of tweets severely limits the agency's exposure and reduces their overall ability to shape the conversation.

While writing this column I started to wonder if they would respond to someone who tweeted at them (e.g. engage in two way communication), so I threw them a softy:

4 hours later I have yet to receive a response. In fact they have not responded to any of the tweets directed at them or referencing them.

Truth is that I wasn't expecting a response, because I know how difficult it is to know how to respond to an inquiry via Twitter "as a government organization".

But the truth of the matter is this: the proliferation and expectation of instant communication as facilitated by services such as Twitter and the multi-layered communication approval hierarchies of government just don't mix. One of these things is going to collapse, and my guess is that it will be the latter. Until then, rigid communication policies will ultimately hamstring departments and agencies looking to engage citizens via social media.

The last thing I think we can learn from PHAC has to do with trending. Let's again examine PHAC's timeline. Looking at PHAC's 7 tweets we see that:
These slight variations are important because the majority of people on Twitter are not talking about "Swine Influenza" - they are talking about "swine flu" and "#swineflu" (the latter are both trending topics, while the former is not). The result is that 70% of their tweets are left out of the larger conversation, thus impeding their ability to contribute and shape it.

You may be asking yourself: when my department or agency is facing a communications crisis of pandemic proportions, will it be able to wield social tools with confidence and efficiency in order to engage citizens and shape the conversation?

I think the better question is: Why wait for a crisis to find out?

If you are interested in further reading, Chris Brogan has some great tips for businesses looking to use Twitter, I am confident that they apply to government departments and agencies as well.

And please, at the very least secure your organization's online namespaces before someone less forgiving/honest than I do it for you.