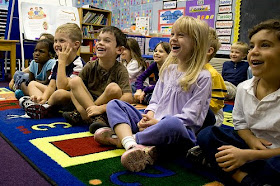 Last week I volunteered in my daughter's junior kindergarten class. Afterward I realized that building online communities is not all that different than building trust with a large group of children. In the column below I will speak directly about my experience in the classroom; while in many cases the corollaries will be self-evident I have purposely employed parentheses to make the analogy more explicit.


Introductions and Credibility via Association

My afternoon in the classroom started with a simple introduction: “Today we have a helper in the class, his name is Nick, he is Larkyn's dad. Can everyone say hello to Nick?” … which was met with a resounding “Hi Nick!” from the children.

In retrospect, the introduction builds my credibility in two ways: the first is that it was issued by the teacher for whom there is an existing relationship of respect and authority within the organization. The second is that the introduction included a peer connection–in this case my daughter Larkyn. The combination of authority (teacher) and camaraderie (Larkyn) created a certain degree of comfort between us despite the fact that we are essentially strangers.


Building Trust One Person at a Time

After the introduction I was on craft table duty. I was tasked to help the children make a hand print using paint and construction paper. Essentially this involved me giving directions (a framework), providing materials (the tools), making the print (the expected behaviour) and of course, cleaning up.

The process by which the children were selected to do the activity was akin to the process anyone should follow when they are looking to build support for an initiative. The students didn't maul the table all at once, nor were they told to come under their own volition; but rather they proceeded one at a time, starting with Larkyn. Starting with my daughter was incredibly helpful because she was my strongest link to the rest of the class. Each child who completed the craft not only selected the next child to complete the craft but also notified them. The key to understanding the success here is that in each case the student who just completed the craft freely selected the person the next person to undertake the process. I think it is fairly safe to say that students chose the subsequent student based, at least in part, on affinity. This approach (to community building) creates a cascading effect whereby each subsequent participant took my direction (advice) readily because they were referred by someone in their peer group.

As a class helper (community manager), this one–on-one interaction also provided me an incredible opportunity to learn about each person in the class (community) individually. I learned their names, which hand was their dominant (work style), their comfort level with having paint on their hands (tolerance for change), their ability to clean up after themselves (self-sufficiency), and who they considered their closest friends in the class (relationship map).


Play Where the Community Plays

I was then advised by the teacher that I could play bingo with the children after their snack, and was given the requisite materials to do so. I asked the kids if they wanted to play and while they said they were interested, they immediately dispersed after their snacks, electing to play with something on the other side of the room instead. Instead of hollering at them to come play bingo I just left the table and walked over to where my daughter was playing with three other friends. We started to play house but after a few minutes of interacting with them on their terms, I told the kids I was far more interested in the large set of cardboard building blocks along the wall. They weren't really interested but I asked them if they minded if I explored the blocks in order to see if they could be put to good use (permission for a proof of concept). They didn't have a problem with it so I began playing (experimenting) with them. I started by walling myself in with the blocks and then I knocked them down in a somewhat raucous manner.

What I learned was that building the castle wasn't going to incite interest (high barrier to entry), but knocking it down was (low barrier to entry). The prospect of being able to knock down a second iteration of the castle was enough to secure the attention of four of the children (early adopters). Given that the attention span of these new converts was relatively fragile, our first castle (project) was fairly simple. We used no more than half the blocks available and the castle was completely devoid of any windows or doors (had only basic functionality). The building process itself took only minutes (expedient). Despite the relative simplicity of the activity and the low number of participants it quickly started to scale as the students became evangelists for it.

The key here is that I didn't push any of the students to recruit others but rather we scaled naturally. In some cases children self-selected to actively bring in their friends; in others, observers simply decided to join the fray based on what they saw. In both cases the initial hook was the same: a chance at knocking down the castle. As our numbers scaled so did the number of blocks we used, how elaborate the castle itself was, and the rules that governed that activity. While I provided advice, all of the aforementioned factors were ultimately determined by the participants through a self-emerging consensus.

The benefits of allowing the group to determine its own code of conduct is that when there is a need to amend the rules of engagement it is felt more bluntly by participants. For example, the look of panic on a young boy’s face behind the wall screaming “I have to pee!” (the detractor) was enough to not only cause the immediate destruction of the structure by the community but also to prompt a new strategic choice: the mandatory inclusion of doors and windows on all future iterations of the castle.

In the final iteration of the castle I started to see enablers emerge. In particular three individuals stepped up and played more active (yet different) roles: Larkyn, Jacob and Ethan. Larkyn was on crowd control, she determined who was in, who was out, she made sure people were sitting, and that they weren't knocking down the structure prematurely (guidelines for behaviour). Jacob was bringing me the building materials, starting with the largest blocks down to the smallest so we could maximize the efficiency of the structure (usefulness of the platform). Ethan was building with me. I took the time to teach him how we could build the tallest and sturdiest structure given the materials at our disposal (community manager).

On the final iteration we had approximately 20 children in the castle, and 3 enablers emerged to facilitate the larger group. Interestingly, participation rates were not too dissimilar from the 90-9-1 rule of internet participation.

For the most part, when the teacher told us to clean up it was all hands on deck. While that was not surprising (they are told daily at that time to clean up), what was interesting was that when we moved outside to the playground the majority of the kids looked to me, Larkyn, Jacob and Ethan (the enablers) to choose the games to be played given the change in the environment. In short, the community generalized its decorum to a different set of circumstances.

When I left at the end of the day it was a parade of hugs. Everyone wanted to thank me for the spending the time in the classroom (kudos for a job well done). In retrospect, I'm so glad I took the time to thank them too (because reciprocity is so important).