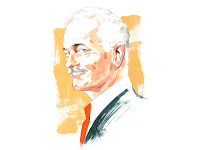 Sadly this week saw the passing of Jack Layton, leader of the official opposition and the New Democratic Party of Canada.

I learned of the news Monday morning via a text message from my wife on the commute into work. I immediately pulled the car over and saw the news breaking on Twitter. I managed to keep it together until the middle of the afternoon when I read Jack's letter to Canadians, at which point the flood gates opened.

The news cut closer to the bone than I had anticipated, and like many Canadians, regardless of politics, I had a deep respect for Jack and his lifelong commitment to serving Canadians.

As I sat back and raised a glass to Jack's life I thought what better way to honour his memory than to write about what public servants can learn from a man who dedicated his life to public service.

Often people are without hope, time wears them down, they become accustomed to how things are, forgetting how things could be. Bring them hope, bring them energy, and if nothing else inspire them to see that change is possible.

We let ourselves fall into traps and adversarial models of how things tend to be, but that is the low road, have the courage and determination to build consensus on a daily basis. Some days you may feel like you have barely moved the bar, but your determination will eventually lead you to gains that no one could have ever anticipated.


Don't let them tell you it can't be done

I can't count the amount of times I've been told that it can't be done, it may be the single biggest tragedy of public service. Don't listen to them, take a lesson from Jack, it can almost always be done. Finally when it can't, go down fighting because time will honour you.