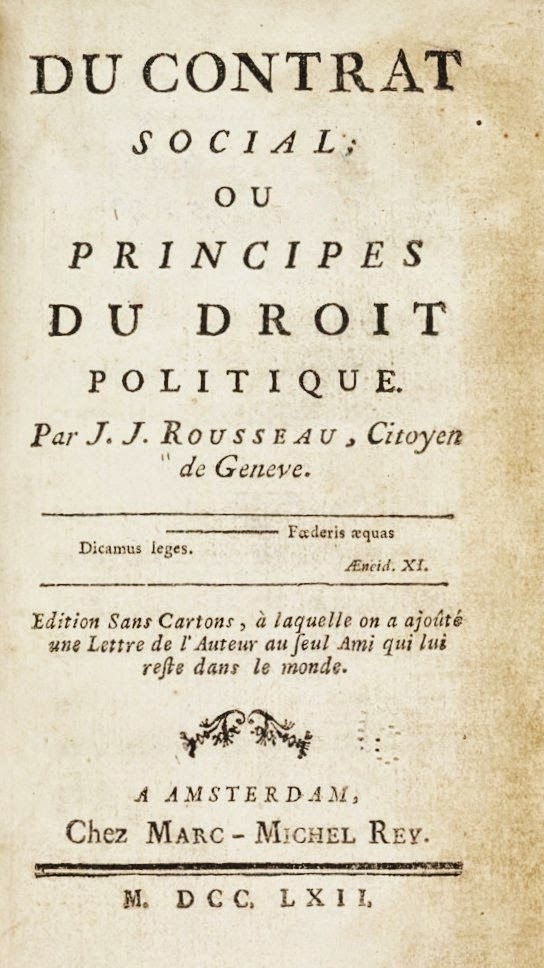 2015 will be the year of the social contract.

That is, the general concept of the social contract will underpin every major discussion on governance and politics for the months to come. At least more often than usual, and going deeper than usual. For no single reason; rather, the result of the intersection of many trends and forces. I'd like to explore those, and frame some questions for consideration throughout the year.

The social contract is an Enlightenment idea whereby human beings, otherwise born free, give up certain rights and accept duties to live in a society in which remaining rights are upheld. We give up the option of violence for revenge, but the state uses their monopoly on violence to promote safety and order. We have a duty to keep properties free of harmful waste, as it infringes on the rights of health and cleanliness of neighbours.

Basically, the social contract is the general deal or arrangement we can expect from the institutions, people, and environments around us, having been born into a society.

The social contract comes up all the time. It's a hairsbreadth away from this incredibly common question: What is the appropriate role of government?

However, I think there's something more grandiose going on these days that is begetting a return to this idea. Multiple threads are converging in the policy space that cannot (or should not) be answered without a serious deep dive into the question of what government does, and beyond that, what people should reasonably expect out of life in Canada.

This post walks through some drivers and signals of how answering this question is harder than it ever has been.

The End of the Job-for-Life

2014 was the year we accepted a re-interpretation of the job's fundamental bargain, and bought in to the push to get us to all work for ourselves rather than each other.

A major downside is the associated departure of pensions, benefits, and stability: a long running contract between employers and employees (see the comments in: Why the Sharing Economy is Inevitable and We Need to Think Differently) . Major, long-term investments like houses and businesses require some degree of certainty. Much preventative health maintenance, often much cheaper than later hospitalization, is affordable only through workplace benefits. For these reasons and others, Policy Horizons Canada, the organization that identifies long-term policy issues, pegged the rise of part-time work as a potential challenge in its 2012 Metascan.

TD Bank studied the issue and found:
TD's conclusion was confidence in the Canadian economy, but even deliberately chosen part-time will have downstream impacts on social security and health care. Do workers choosing flexible employment deserve a revised social contract? For reasons of principle? Of pragmatism?

Part of that trend towards self and part-time employment is driven by what one might call a nichification of the economy, where enterprises of every scale and scope emerge through lower transaction costs. Between someone renting a room through AirBNB and a hotel there's a business with a handful of standardized rental properties using AirBNB as an online storefront. And everything in between.

This could be a fascinating, high-potential, or even damaging trend for the economy. However, I also suspect that as governments try to categorize and regulate - or justify not regulating - new business models, the logic of existing laws and regulations will face massive scrutiny. Over the next few years, we're about to play the Socratic Method game with institutions' approaches to governance and it may not be pretty all of the time.

What should would-be entrepreneurs be able to expect from their business environment? Can we develop principles? Do we rely on heuristics, rough measures for categorizing businesses, for the sake of pragmatism? Can we do better?

Kevin Milligan wrote about this idea in 2010: scrapping pensions, employment insurance, and other social security payments and instead guaranteeing a minimum income (small, but livable) for all citizens, but deducting for every dollar earned. 2014 saw a conference in Montreal on the topic, the premier of Prince Edward Island floating the idea of a pilot, and elsewhere, Switzerland planning a referendum on the topic.

The immediate question is whether it'd work well. The deeper question is on principle: is this how people live in Canada? And there's a meta-question: what balance of principle and pragmatism is desired in governance? In the UK, the head of the Behavioural Insights team* (then government, now spun out) took flak for the pursuit of effectiveness: critics argued that paternalism went too far and humans must be allowed to be humans and make decisions on their own.

Many people apply this logic - that some things should be hard - to other government programs, such as Employment Insurance, which would be in play in a Guaranteed Annual Income discussion. Analogously, we hear arguments about whether or not voting should be easy (Andrew Coyne and Don Lenihan recently debated making it mandatory), an argument drawn very much from principle.

This brings us to:

The End of Voting

In the early days of the social contract, democratic representation wasn't necessarily in the picture. The core idea was just people giving up some rights for order, peace, and stability, which as easily described Monarchical states.

Since, voting has been the central act of participating in democracy.  "If you don't vote, you can't complain", as the bumper sticker goes. My CPSRenewal coauthor Tariq Piracha calls this bullshit, with which I'd readily agree.

As is increasingly obvious, voting is one of many ways of participating in democracy. For most Canadians, it's decreasing in potency (our population has grown faster than the House of Commons). Theoretically, time and access for writing or visiting your Member of Parliament would be decreasing as well. At the same time, alternatives outside the formal political system are increasing in popularity and availability (relevant: Nick's post on Digital Governance).

We've come a long way since the original view of the social contract. Today, citizens demand far more than a vote. They demand to sit at the table with the same information government has, through transparency and accountability measures. They're demanding, proactively, to give more on their side of the bargain: the end of voting as the central interaction between citizens and institutions.

But these are not simple changes to the contract. 2014 may have been the year of accountability backlash, where intelligent observers called for shutting down the cameras in government: the return to "the honest graft" and backroom politics in the name of effectiveness (see: How We Govern Ourselves).

Once again, we find ourselves with a fascinating question about what citizens should be able to expect of the institutions around them, with competing pragmatism and principle approaches, and no agreed-upon framework with which to even begin answering the question.

The Better Angels of Our Nature

We never formally agreed on the principles of the social contract; it was as much an ex post rationalization for the way things had evolved.

The social contract was broken repeatedly throughout history: legal recourse failed and people lost assets, corruption twisted institutions, and people were falsely imprisoned (and executed). Once, public executions were spectacle (the guillotine was still used up until the mid-1950s in many European countries) and the possibility of wrongful sentencing was ignored. The people who watched were basically genetically identical to us. Now, we have - rightfully - comparatively high standards for how humans are treated. We have the empathy to apply those standards to others, people we don't know.

These standards, and the outrage they generate when they go unmet, defined the end of 2014 for me: perceived unfairness from institutions towards citizens.

Stories of police violence in the United States, business owners having trouble interacting with government, even inadequate citizen interactions with government services or websites - they all upset people's notions of fairness. States and institutions have become far more responsive over the centuries, but, more than ever, the remaining gap between expectations and results garners attention. This is a wonderful, positive development, but it puts pressure on government to perform well and minimize breaches of trust.

Regardless of the magnitude of the transgression, citizens increasingly are both aware and unaccepting of all perceived breaks in the social contract, of all perceived unfairness. In fact, it's not just citizens; legitimately elected representatives are increasingly questioning the legitimacy of the system that gives them and others authority. One example is elected representatives denouncing judicial branch decisions. It's fascinating and telling to see friendly fire among institutions of the social contract.

All of which means that pragmatic, broad-strokes policy is increasingly difficult to implement, because it's unfair even to small subgroups. Policy interventions in the Grand Banks Fishery - which would have been pragmatic - were delayed due to principles. On grounds of fairness, traditions, and rights of fishers.

On the other coast, BC's carbon tax could only be implemented with a revenue-neutral approach. It seems that we have, as a society, set a status quo. Changes cannot leave anyone worse off than before.


A later social contract thinker, John Rawls, described this as the maximin principle. However, our starting point arrived by accident (I'd argue media and the digital age revealed it, to an extent), not by any agreed-upon principles. Is that fair?

I tend to avoid discussing politics online. However, it's inescapable that politics drives much of the context for the Canadian public service, and for public service renewal. The idea of the social contract is far grander than the public service as well, so it'd be a gross omission to not mention that 2015 is a federal election year.

Perhaps less so in Canada, but that starting question about government's appropriate role plays heavily in politics. From Paul Wells:

But mostly, this election will pose, in stark terms, the central question about government at the national level: What’s it for?

This post contains no prescriptions, just a lens for thinking about a changing Canada and its policy environment, and a reference point for more focused CPSRenewal posts for the year.

These days these questions are much, much thornier than usual, and we need to go much deeper in answering them. The surface-level answers to these questions - incremental changes from the status quo - won't hold up given the nature of changes at our doorstep.

As an aside, the Impossible Conversations public policy book club has covered topics ranging from marketing in political campaigns, to government's role in innovation, to the moral considerations of technological progress, to austerity economic policies, and the social contract has come up in every single discussion.